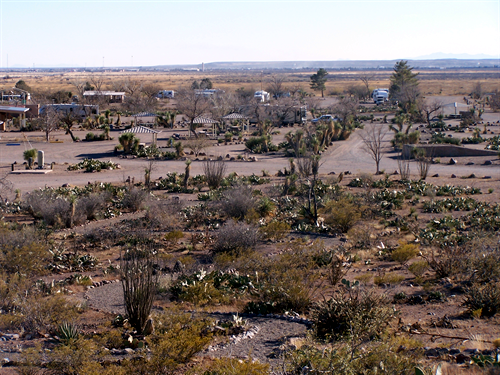 We’ve been home too long so we headed out at about quarter to 9:00 on Friday the 3rd of January 2014.  Traveling 197 miles through Palominas, Bisbee, and Douglas, Arizona then into New Mexico through Rodeo, Animas, and Hachita, to the town of Columbus that was raided by Pancho villa on March 9th, 1916.  We plan on staying here through Monday night.

Pancho Villa State Park was created to memorialize that raid and the subsequent punitive invasion of Mexico.  Though the name is controversial, it was chosen to attract tourists to this sleepy little town. I have to ask: Would most Americans find “Osama Bin Laden Park” to be an acceptable name for the 9/11 memorial?  I think not.  Though he did not kill nearly as many people or do anywhere near the amount of damage, Pancho did commit heinous crime against the United States and her citizens.  Time does change some people’s perspective.  But on the other hand, would anybody come if they had named the park for Camp Furlong?

Here at the park they have a very fine historical exhibit explaining much of the significance General Pershing’s 400 mile expedition chasing Pancho deep into Mexico.  It was the military’s first use of autos and airplanes and it helped prepare the army for WWI.

We were treated to several very pretty sunsets.

The park was not at all crowded. These are our neighbors.

As you can see we had great weather, beautiful scenery, peace and quiet. Who could ask for more.

We traveled about 3 miles south to Puerto Palomas, Chihuahua where there is a great store filled with Mexican crafts and a wonderful authentic Mexican restaurant all just a short walk across the border.

On the way back we stopped to see the Columbus Historical Museum house in the old railway station.  Well worth the stop!!

All of this just a few miles from home.  We like the back roads but for those in the fast lane Columbus and Pancho Villa State Park are about 30 miles due south of Deming, NM.

In our spare time on this trip we began planning our drive to Idaho in May.  More on that later.

I used to be indecisive but now I’m not sure.

Our small family living in a 5th wheel following Dads work as a rock fall technician... what could go wrong?

A Look on the Brighter Side of Life

Apps for any screen

The latest news about WordPress and the WordPress community